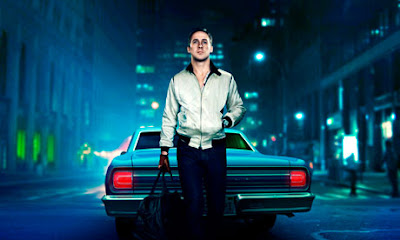 A strong silent type stunt driver by day and by night a gateway driver (Ryan Gosling) stars in what I would call a modern masterpiece with an elegant style of the 1980’s artistic neon elegance. A thrilling car chase film about a loner who falls in love with his neighbour Irene (Carey Mulligan). Her ex-convict husband Standard (Oscar Isaac) is in debt with the dangerous underworld Mafia. Driver offers to be a gateway driver for a heist that would pay off the debt goes horribly wrong and the Driver finds himself targeted by the Mafia. Not being able to kill the Driver and get their money back they turn to the two people he ever loved Irene and her son.

Personally I see Drive as a film that has barely any dialog and that the entire film is driven by beautifully shot sequence, breath taking cinematography and the elegant 80’s style. What made Drive really stand out for me most was the line between Romance and Violence.  The elevator scene is a sequence where there is no dialog and only emotions is used to reflect the imagery on the screen. When one of Mafia hit-man walks into the elevator the Driver gently pushes Irene back and kisses her. Here we see one side of the Driver as a white knight and shining armour hero but within the same sequence we see a psychotic killer who smashes the hit-man’s skull in, a side that Irene has never seen before. This reminds the viewers that the Driver has a murderous rage and is not afraid to embrace it. This elevator sequence is very defining character moment in sense that we see the romantic side of the Driver kissing Irene for the first and last time and straight away we see him become a monster crushing the Hit-man’s face. This entire sequence is done with no dialog and just movement and what makes it so beautiful is that all emotions shown through movement; caring when he gently pushes Irene back, love when he kisses her and rage when he kills the Hit-man. Though Drive is set in a present day LA the film’s atmosphere is heavily influenced in a 1980’s style. Drive very much has a neo noir nostalgic 80’s elegance to it; with its neon bright pink opening credits that looks similar to Roger Donaldson 1988 Cocktails or Paul Brickman’s 1983 Risky Business. The soundtrack also is a reminder of a 80’s electronic pop with synthesizer tones. 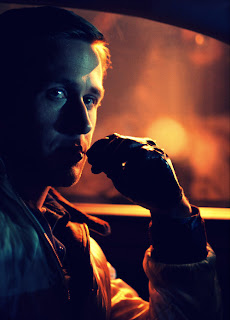 What makes Drive one of my favourite films of 2011, it’s vastly influenced by the genre’s and style that it portrays on the screen and that it stays loyal to its genre. The violence in Drive is very unexpectedly gory and graphic which makes Drive such a brilliant crime and drama film. With scenes like the elevator sequence, car chase or the stabbing scenes it can seem like an action film but it’s not. The genre being a; car chase, crime and drama film with a 80’s style, Drive really does pay tribute the car chase genre with scenes like the opening police chase and the heist scene that goes wrong. The crime and drama is what sets the film and to me that is only the foundations of the film. To get deeper into the crime and drama genre we have to look at the violence and the surprising realistic gore we are subjected to.  To me Drive is a realistic outlook of the dark impulse of murder. The scene when Shannon (Bryon Cranston) gets his wrist cut open and blood starts gushing out is very simple and realistically view of how easy it is to kill someone.
Posted by Unknown at 14:42