I still remember till this day when my older brother went to blockbuster and rented 28 Days Later and told me “This is meant to be an ssssick zombie film” after watching the starting scene I never did think monkeys was cute anymore. I remember sitting back thinking if there was a zombie attack I could easily survive! Zombies are very slow and dumb so I was pretty sure of myself . . . . Till I watched the scene when Jim first encountered and was chased by deranged insane raged infected. I remember everyone in the room screaming! Words cannot explain how flabbergasted everyone in the room was. I remember the film finished how much I just wanted Danny Boyle to make squeal. But as years when on and I got much older and watched many more films and many more squeals.  Usually with squeals they never do live up to the first film. It’s sadly the usual case of never living up to the expectation. With the first film being such a success box office and reviews it’s never a surprise that they would continue the film. But the squeal to 28 Days Later to 28 Weeks Later had such a large gap in between them it’s no surprise that the expectation to for the second one would be really high. I remember when I watched the first one I dreamt of Danny Boyle making another but he never did. Years later 28 Weeks Later was surprised to see that Danny Boyle would only produce it and the film would have a much higher budget from the first release. Counting the days and reading any article writing on the progress of 28 Weeks Later. I remember reading there would be more infected, more action and much more gore I just couldn’t wait to watch it. 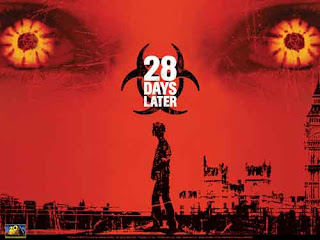 What I loved about Danny Boyles 28 Days Later was the constant feeling of knowing the infected could attack at any random moment e.g. bedroom room scene, first encounter with the infected at the church, running up the stairs of the apartment complex. The tunnel scene when the taxi cab had a flat tire in the Blackwall Tunnel and they had to replace it with another while the infected got closer. Till this day when I drive through the tunnel I wonder what the hell I would have done. There were literally no other characters in the film so the audience really did have a connection with the four survivors and why the scene with the farther becoming infected was so heart breaking. Running up the stairs scene was the most intense moment for me personally in any film. The feeling of running up countless stairs with a heavy bag and already tired when there’s an fast running infected chasing you. The violence and gore in 28 days later was so intense it really did feel like reality and not a horror film. Not many people liked the idea of the soldiers being rapist but I feel that it is a realistic view of what would happen. It really was a real insight into what would really happen if infected did over run England. The world government would quarantine the country and the remaining survivors would go insane. Soldiers would do rebel against their superior officers and take control for themselves. The killing of the last soldier even today much older and seen many gory gilms still makes me look away. 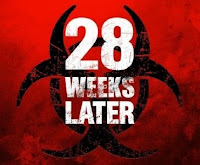 The opening scene of the first encounter with the infected really did give so much promise to the film and really felt like it did justice to the first film being in a huge mansion with the infected breaking through, running around and not many places to hide. The chase scene again was so tense and terrifying with unless amount of infected running downhill chasing the coward farther leaving his wife for dead. Personally I felt like after the opening first scenes nothing happed! It was so boring and slow I remember moving a lot and even going to the toilet once in the cinema WITCH I NEVER DO! 28 Weeks Later did become original 28 self when Don became infected and the mother was not only locked in the film with him but tied down and again being a 28 film the gore and violence was so terrifyingly fantastic. The beating and smashing of the face and the classic 28 Days thumbs in the eye and horrifying screaming pain really makes the skin crawl.

Both films have fantastic terrifying tense moment and for me this is what makes the 28 films so thrilling to watch. 28 Days Later being the stairs scene; imagine walking up endless amount of stairs with a heavy bag, tired and all of a sudden the very fast infected chase you and you still got another hundred stairs to go. The end mansion scene when both the soldiers and survivors are being chased in a dark empty mansion by the infected and as each solider becoming infected one by one and with the gruesome killing of the last solider with the thumbs in the eyes. the Blackwall Tuunnel scene sits makes me sit on the edge of my seat. 28 Weeks Later did really lack story and was really painfully slow and the how the outbreak happened again till this day I say “I can’t believe the US military gave a janitor all access to the base!” and it’s sad to say it didn’t live up to what I wanted but it did have some amazing scenes which personally I feel did make the film a 28 worthy film. I can only imagine in my nightmares how terrifying it must have been locked in a car park full of people in the dark with infected running around. 28 Weeks Later really did pay homage to its previous 28 Days Later with again terrifying tense moments; the opening house scene, Don becoming infected and beating his wife to death and the car park scene when hundreds of survivors was being infected. To me personally its these scenes and gut ranching moments of being beating to death really do make a 28 film and I hope that the third release will shadow the other two and live up to its hype but we will have many more years for 28 Hours??? or Months Later???