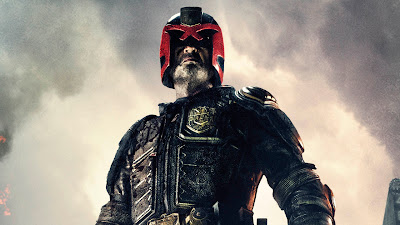 From the Atomic Wars of 2070 the world is now a Cursed Earth. With most of the United States riddled with radioactive wastes. On the East Coast from Washington DC to Boston lies Mega City One. One of the only human habitats left. A dystopian metropolis with a population of eight hundred million people, this city is more of a utopia for violence, criminals and rioters. With the streets full of violence the “Judges” are the law and order protectors of the city. These judges are not your typical court room robed judges. They are a combination of a police force with the power to judge, jury and, on the spot executioner. This justice department and law enforcement are feared throughout the city and the most notoriously dreaded Judge is Judge Dredd (Karl Urban). This gun slinging, bullet dodging and skull crashing Judge has to take down one of the most powerful gang around the “Ma Ma gang” lead by Ma Ma (Lena Headey) who as whole city addicted to a new drug called “Slo-Mo”. A drug that makes reality seems to go at an abnormal fraction speed.

I personally am not a fan of 3D but after watching Dredd I really am pleased to say that this is one of the most visually beautiful films I seen in a long time. I didn’t even go to my mega IMAX cinema’s I just went to my local cinema. So one can imagine how spectacular it must have looked. The plot pretty much had the same story as Gareth Evans The Raid., which again made me question the films possibility of delivering the same action, gore and violence. Again I was totally mistaken once again. Dredd truly did stay loyal to its comic book origins. The whole focus of the Judge Dredd universe is that “The Law” is everything and their sole purpose is to make sure no one is above the law include themselves and that a Judge never relives his identity which is Karl never takes his helmet off.

The most spectacular 3D effects are seen whenever Slo Mo is used. Every colour is beautifully lit up and seeing everything at “Bumper slow speed” really is memorizing. As soon as we’re snapped back to reality the film has a brilliant dark neo noir style. For those who remember back in 1995 Sylvester Stallone starred in a Judge Dredd film also and though the film was a great laugh and I have to admit I did enjoy watching it I wouldn’t say it was the best looking films. Not because of graphics but because it just didn’t look dark enough. One thing I can say about the two Dredd’s they both have amazing quotes and with Karl Urban’s gritty deep voice it makes Christian bale Batman voice seem like a high pitched sissy voice. I definitely will watch Dredd 3D a few more times in cinema with an IMAX experience and buy my Blue-Ray copy later on this year. Dredd 3D is certainly is a great action film shoot'em up, a thrillingly gory film that makes you shield your eyes and just seeing the spectacular graphics memorize you. Dredd 3D is personally one of my favourite Sci-Fi films of 2012.