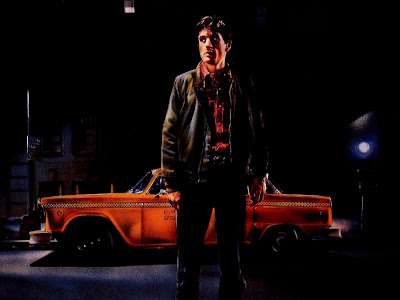 The only parts of New York we are subjected to are the back streets of New York. In most films we’re always taken around the Statue of Liberty or the Empire State Building. In Taxi Driver we’re constantly driven around the more dangerous and crime ridden areas. With Travis relentlessly exposed to these areas his view on New York repulsion. “I think someone should just take this city and just... just flush it down the fuckin' toilet.” In most New York films the cinematography is always typically the same; bird’s eye view shots looking down the busy streets of New York,  low angle shots looking upwards to monstrous like building over shadowing the people and the glamorous typical locations of Times Square and Broadway. Through the cinematography we only truly see New York through the taxi cab passing by. The New York we see in Taxi Driver is the cheap shady bars, strip clubs, 24 hour liquor stores and adult movie cinemas. Of course the people we see are the typical crowd that hang out in these areas; street hookers, pimps, drug addicts and alcoholics. All these elements help fuel the illusion for the projection of Travis’s mind. What Travis sees if what the audience sees and what Travis feels is what the audience will feel. All the mise-en-scene and cinematography that Martin Scorsese uses are all an external projections of Travis’s mind. Through Travis’s mind we are taken through New York on his perception of what New York is and we see his sanity slowly slip with the inner monolog. 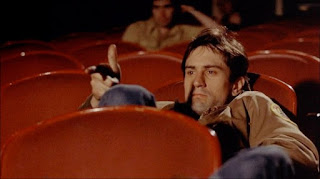 Too get a better understanding of who is Travis we have to look at the; emotional physiological and physical journey he undertakes in this film. Suffering from insomnia there’s a persistent feeling of been wide awake and charged. Every time Travis takes medication there’s always a Non-diegetic sound. In the taxi carriage scene when Travis takes his medication both inside the cab and out there’s an electric charge in the background. Both times Travis’s actions give the impression that he is being filled with adrenaline and almost as is he being recharged. The second time he takes his medication is in the café. This scene creates a misconception that Travis’s brain is being almost vaporized. When Travis puts the tablet in the glass he begins to bizarrely stare at the glass as if he’s been memorized. The dissolving tablet in the glass is a perfect visual example of Travis’s inner mind slowly loosing grip in reality. As Travis slowly becomes more delusional the atmosphere of Taxi Driver begins to questions what is real and a figment of Travis’s imagination. To help fuel the illusion of Travis’s imagination the use of colour is heavily over whelming in particular scenes. The red, amber and green of traffic lights or the flashing lights from the bars and clubs are a fantastic visual expression of Travis’s moods.To show more isolation and distance from people, the framing on Travis’s always seemed to make him the centre of the screen. Walking around the streets of New York or in the R rated movie theatre people always seem to stay away from Travis and keep their distance. We see all kinds of people that represent different class status of New York; Pimps represents the womanising dead beats, the prostitutes are a representation of sex, drug addicts are the corrupted and men in businesses suits that look they work in Wall street are almost the yuppie culture. 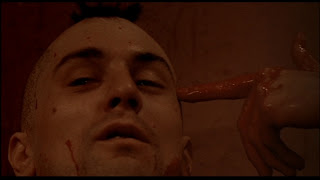