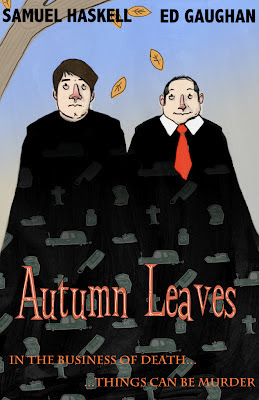 How far would you go to save your family business? Lee Barham’s award winning short at the Audience choice award at Thurrock international film festival of 2012 called Autumn Leaves, is a funny black comedy about a Funeral director’s son, who realises of his father’s failing business. Deciding to take matters into his own hands, William Dart (Samuel Haskell) doesn’t sabotage the competition but instead kills his fellow hometown neighbours in order to keep the funeral parlour in business.

With William returning home from university he discovers that his father’s business T. Dart Funeral Director is going under. William and his widowed Father Thomas Dart (Ed Gaughan) seem to be out of luck however William accidently drives over a man and flees the scene. Returning home William is confronted by his father with news of a client just coming in. The client being the man William hit his car with. Seeing his father over joyed William is unable to confess the hit and run. While his father being optimistic with the opportunity of the business getting on the move again, William is still dwelling on what his father’s words, “Can’t really wish for people to drop dead”. William considering this decides to murder selected people from his hometown. With the business blooming all seems well until Williams father learns of the horrid truth of his sons killing spree.

Written and directed by Lee Barham Autumn Leaves really does put the fun in funeral; with an original plot of helping his father but twisted into this odd paradox of murder, awesome soundtrack and a great jazz feeling of death in the air. Watching Autumn Leaves really did remind me of the British comedy Frank Oz’s 2007 Death at a Funeral. Watching William go beyond the measure of keeping his father’s business afloat, Autumn Leaves is a fantastic outlook of the relationship between father and son.
Posted by Unknown at 17:01