Which Die Hard Are You? 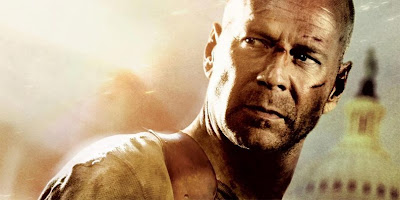 Now we all can discuss which Die Hard is the best and usually of course the 1988 Die Hard is the most preferred, being the first movie to introduce our favourite yippee ki yay gun slinging cowboy cop John McClane and let’s not forget one of our favourite German villains Hans Gruber. None Die Hard fans would argue that the Die Hard franchise all 5 of them are typically all the same; a bad boy rouge cop always seems to get caught up in a middle of things, action packed, explosions, endless henchmen’s and villains that seems to have a gruesome end being thrown out of skyscraper, sucked into a jet engine or a fiery inferno helicopter crash. But saying that all the Die Hard films are the same in my opinion is totally bull! That’s like going to a Bond movie and saying I was expecting something different from the previous other twenty bond films. But what I love about the Die Hard series is that each film takes us into a totally different scenario being whatever the villain hopes to accomplish from hijacking a corporate building keeping its staff and CEO hostage to cyber terrorism systematically shutting down the entire U.S. infrastructure. All four Die Hard films has its own unique place but sadly the fifth Die Hard is not only the worst Die Hard it’s one of the worst action film. Comparing from my favourite Die Hard “Live Free or Die Hard” also known as “4.0” and the other Die Had series to the 2013 release “A Good Day to Die” you can see where the series went totally wrong.

The 2007 Live Free or Die Hard is a perfect mix between the 1988 Die Hard and the 1995 Die Hard with a Vengeance. The 88 release was stepping stone of the series when it is the first film ever to have the hero trash talk through to the villain through a radio throughout the entire film. And each Die Hard since then has carry on this tradition. Even in Live Free when technology is much more ahead of just the simple radio from the 88 Die Hard. McClane doesn’t just use the radio but uses webcams and cell phones to trash talk to the villain. And with this tradition our hero and villain never actually meet in person till the showdown at the very end. What I love most about Live Free is how much it takes from the 95 Die Hard. The first Die Hard is set in one building or one location but with Vengeance our location is one city. So the villain’s playground is Net York.  But Live Free villain    Thomas Gabriel a former US Defence Department analyst takes on the United States by hacking the computers of the U.S. Federal Bureau of Investigation and totally shutting down all transportation, gas, water and electricity almost taking the country back to the stone age.

What I found most lacking in A Good Day To Die wasn’t the fact the film had no radio, cell phone or even any trash talk to the villain but it was the relationship between John and his son. The two characters couldn’t bounce off each once and you would have thought being john McClane son he would have some witty comments like his father but no. It was as if they weren’t even related. Being a father and son based film you would think Good Day to Die would be a fantastic transition of old school Die Hard to new school but sadly once again it failed at this also. In my opinion in the Live Free or Die Hard relationship between John McClane and Matthew Farrell a computer hacker who unknowingly help set up the “Fire Sell” was a better father and son relationship even though they weren’t related. The transition between them is the typical computer based father and son relationship being that the son knows more about computer then the father in this case McClane being so old school he knows nothing about computers and Matthew Farrell knowing so much. The two fantastically bounce off each other whenever Farrell tried to explain anything to do with computers McClane just looks perplexed and lost. But when push came to shove McClane would shoot his way out of anything when Farrell would just whimper and hide. Live Free or Die Hard is a fantastic explain of putting someone who knows nothing about computers into cyber computer warfare and this is why Live Free is my favourite Die Hard. It’s taking our hero out of his comfort zone and into a totally different scenario.