Staring Viggo Mortensen simply known as the father and his son Kodi Smit-McPhee. John Hillcoat’s post-apocalyptic drama is a film adaptation of Prize-winning novel of the same name by author Cormac McCarthy. The Road is a brilliant dark melancholic vision of a dying or perhaps already dead planet Earth, a world slowly becoming inhabitable for; plants, vegetation, farm stock and even human life. The father and son journey through an unforgiving world of a population of few that has driven them to lawlessness and cannibalism. Hillcoat not only brilliantly captures the dying planet through stunning cinematography of beautiful landscapes that truly does juxtaposition of the term beautiful being that the landscapes in the entire film is dying that sets the melancholic mood of a dark gloomy grey skies and the atmosphere filled with dust and ash.

We never truly discover how the planet became a ravaged landscape of; falling trees, burning fields that fill the air with ash and the blue skies and white clouds are replaced with a depressing grey sky with smoke. All that we know the father and son are in between the lines of a dying planet and the cannibalistic rednecks that only seem to only prolong their deaths. The only thing we know that the two are heading to warmer south unknowing what truly awaits them there. The only glimpse of their past we see is the memory of the father in a series of flashback that seem to haunt him.  A time just after the devastation revealing that the man had a wife and his son was born months just as civilisation collapsed. Years went by and his wife became ever so disconnected and living in a world knowing her days were numbered she eventually committed suicide, leaving the father and son to fend for themselves. 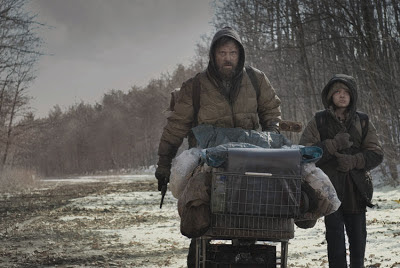 The Road is truly one of my favourite post-apocalyptic films out there today. Its dark vision, melancholic atmosphere and performance of the father and son are incredibly powerful. The journey the father and son take shows us how utterly hopeless this journey down south is and yet they still press on. Armed with only a pistol with two bullets, the clothes they’re wearing and a shopping trolley with the few scavenged food they find. The close the encounter of the cannibals always leads to the father pointing the gun at his son sparing him from possible rape and torture makes the film excruciatingly tense to watch. Hillcoat truly does capture the journey of the father and son not through focusing on the world and how it became so shattered but rather focusing on the voyage of survival and how day by day they try to reach their hopeless destination.
Posted by Unknown at 11:00