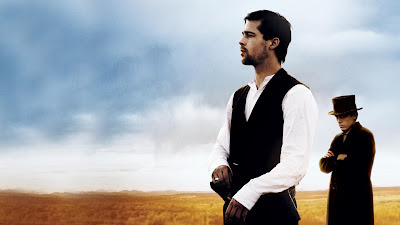 To grow up watching cowboys have shootouts in saloons, have Clint Eastwood have his final stand with “The Bad” and see the sheriff finally take down the outlaw riding away into the sunset. Andrew Dominik takes the western genre to a whole new level. The Assassination of Jesse James by the Coward Robert Ford shows the skin deep, psychological battle of within, fame and infamy of Jesse James (Brad Pitt) and Robert Ford (Casey Affleck). Instead of making this classic tale of the last train robbery by the James gang into a simple shoot’em up western, Andrew goes farther into the mind frame of Jesse James and Robert Ford. Andrew centres the narrative of the film and shows the audience the psychological impact on Jesse’s mind during the era of facing the end of his outlaw career, the constant paranoia of being turned in by other gang members and the embracing of his own death that he himself foresees in the near future. We are shown this world through eyes of Robert Ford who idolized James all his life and always wanted to join the James gang but in the end to become as famous as his hero he betrays Jesse. Personally I feel that Andrew touches every emotion in this film, with the; plot, cast, narration and spectacular cinematography.


﻿﻿﻿﻿﻿﻿﻿﻿﻿﻿﻿﻿﻿﻿﻿
At the very first scene I straight away knew this was going to be no other western that I have ever seen. At the very opening scene we are introduced to a time lapse sequences with a Hugh Ross as the narrator, verbally describing of Jesse and his legend. These time lapse scenes that Andrew uses throughout the film are the key core of what helps create a melancholic feeling. We are shown a sense of time has gone by which creates a climax of unease and tension as the film goes on. The footage that Andrew uses looks like; grainy, unfocused aberration edges that help create a nostalgic feeling of old photographs. These time lapse scenes feel like a dream with the narrators firm yet peaceful voice narrating the story as if reading towards the audience. The magnificent widescreen shots that capture cold winter day help create an eerie feeling and isolated atmosphere of loneliness. Roger Deakin visually helps grasp the atmosphere in every scene and I every shot. Deakin plays with the colour contrast to enhance other colours to create an even heavier atmosphere. Even the use of natural light gave the film such beauty making film feel more genuine and less artificial. 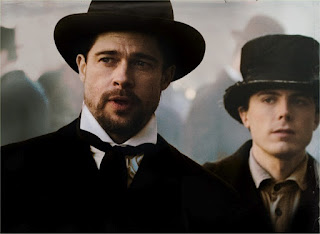 Affleck does a remarkable job playing an uncomfortable Ford who always teased and cajoled. He always in visions himself with “great grit and intelligence” luring for fame and immortality. Never more the fact that Ford tries to befriend everyone but his awkwardness always fills the room and the James family always seem to notice this. Jesse’s wife Zee (Mary Louse Parker) always seems to be unease with Ford’s presences. Even when Ford spoke with Frank James (Sam Shepard) there first encounter Frank felt awkward with Ford “, the more you talk, the more you give me the willies”. His childhood hero Jesse becomes an obsessing constantly tries to please him; pretending to smoke but can’t, regularly giving facts about his looks and habits and even comparing similarities between them but this only disturbs Jesse. Affleck and Brad show great connection with their characters with Affleck first seen as the “obsessed fan” but slowly realising that the hero in the magazines he collected as child was not really the same man but the obsession becomes love. This is seen when Jesse humiliates Ford at the dinner table and Ford shows a violet fit. In the end for fame and glory Ford kills Jesse but his life takes a turn for the worst from then on being labelled as a coward. The title labels Ford as a coward but in this film we see him obsessed young man that grows to love his hero and the love and desire to be  him, it becomes so strong it becomes murderous. 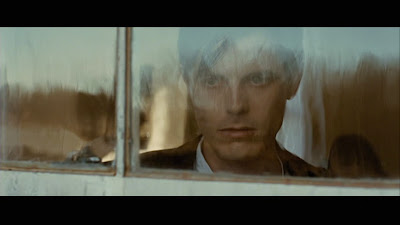