Don’t Make Me Ang Lee! You Wouldn’t Like Me When I’m Ang Lee!

After Watching Marvel Avengers Assemble It seems now that everyone is Hulk fan. Some are Hulk fans after they watched the movie and others seem to say “I’ve always been a Hulk fan” even though they really never were.  You know when character is popular when everyone is planning to dress up as him for the upcoming Halloween. Just like the 1994 Brandon Lee The Crow and let’s not forget The Dark Knight 2008 Heath Ledger’s The Joker. So don’t be surprised if you see about eight or nine Hulks in one party. So with the rise of Hulk’s popularity increasing and everyone seems to be itching to slag off the 2003 Hulk starring Eric Bana and rave about Edward Norton’s 2008 The Incredible Hulk.

As a Hulk fan from childhood, spending my entire pocket on Hulk toys, comic books and always picking Hulk in Marvel VS Capcom 2. It annoys me when people watch one or two Hulk films and seem to act like they know who the Hulk is. When in actual fact to understand Hulk you first have to understand who is Bruce Banner, which is why I prefer the Eric Bana Hulk rather from the Edward Norton’s The Incredible Hulk. You can tell from both films that the directors focused on two characters Ang Lee focused on Bruce Banner and Louis Leterrier fixated on Hulk. Of course everyone wants to see Bruce freak out and turn into the Hulk and destroy everything in his path but you have to realise that the core strength of the Hulk comes from Bruce Banner’s past. The film that portrayed that most was the Ang Lee’s Hulk. The Lee’s Hulk had more of a melancholy theme with Eric portraying Banner as a psychologically complex protagonist with his character constantly touching on anger and fear.
Why I prefer Lee’s Hulk to Leterrier Hulk is that Stan actually took part as a writer for Lee’s film rather than just being an executive producer in Leterrier Hulk. It’s obvious in Lee’s Hulk that Stan had more control and help Ang Lee to portray Bruce in the way Stan wanted, which is why Eric Bana did a much better job portraying Bruce rather than Edward Norton did. Stan was involved in the production more and helped Eric get into the mind set of Bruce. On an emotional level you can see Eric doing a fantastic job showing an emotionally multifaceted character with an uncertain history. Eric really does come to grips of who is Bruce Banner and it shows. The scene when Eric describes the feeling of losing control Betty “The feeling of boom boom . . . boom”. Eric portray Bruce fighting the demon within. When watching Leterrier’s Hulk it just felt like Edward was filling in the scenes and everyone just waiting to see Edward turn into the Hulk and smash everything. Edward did great job acting in the movie but I felt that he couldn’t portray Bruce like Eric did. Watching Eric not turn into the Hulk and emotionally fighting within reminded me of Dr Jekyll not turn into Mr Hyde and this is was Stan wanted in this film. Stan Lee was inspired to create the Hulk after reading Robert Louis Stevenson’s “Strange Case of Dr Jekyll and Mr Hyde”. It shows in Ang Lee’s Hulk it’s not just about “Hulk smash!” but watching a man to keep all emotional feelings to at a minimum. 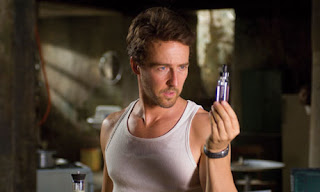 Lee’s film explores the origins of the Hulk and Leterrier’s Hulk is a loose sequel set in a late future. I personally feel that the Lee’s portraying of Bruce and Hulk was spot on and he had all the ammunition he needed with a fantastic lead man and a writer who created the whole plot years ago. In the end it’s the sad fact that people wanted action and smash. It’s also sad that Eric gets all the negativity when in fact he did a better portrayal of Bruce than Edward but Edward gets better credit because he was in a more popular film.
Posted by Unknown at 08:55