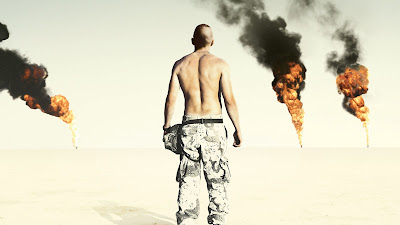 A coming age journey of a young man desire to join the marines like his father and grandfather and become somewhat of a war hero but instead takes a nose dive into madness and obsession for his first kill. Set in the Gulf War Swofford (Jake Gyllenhall) encounters first at hand how his voyage takes him into war and learns from first at hand the first casualty of war is ones inner self.  Watching Jarhead we first at the how modern warfare today is so very different from previous wars such as the Vietnam War. We see first at hand how Vietnam War may have had more of a death toll then the Gulf War but the psychological impact on the soldiers war far more greater being that the Vietnam War so un-glorified compared to the first and second world wars.

From an external view Jarhead is a story of a young man whose ambition in life was to become this glorified sniper returning home from battle to be greeted with parades and people waving flags. But if we look at Jarhead from an internal view Jarhead is comparing the wars between the Gulf and the Vietnam War. Comparing the two we see how both Wars so different from the public view being that the Vietnam War veterans who was spat on and Swofford in the Gulf War was welcomed back with open arms and as a hero. However his own personal battle with on conscious drives him to question what he actually did in that war? Being that he never did fire his weapon once and the never did kill an enemy. For Swofford the only real enemy of the Gulf War was the blazing heat of the Middle Eastern deserts, countless hours boredom and that his idea of the Band of Brothers of war is not memory of battles but rather him and his fellow soldiers were taking the piss out of each other and relying on each other’s sense of humour.

The perfect scenes when both wars come together is when Swofford is in the parade returning home and a Vietnam veteran jumps into the bus cheering the Gulf War soldiers for the accomplishment they done over seas.  But is cheers are short lived right away when we physically see the Vietnam veteran remembering his traumatic war and how Swofford realises that his war so very different from that veteran. If we look earlier into the film Swofford’s father is also a Vietnam veteran. In the only shot we see him in is at the very beginning when Swofford quickly sums up his life and the relationship with his family. In just one shot that’s about five seconds long we see his father wearing robe still wearing his dog tags and looking so disconnected with the outside world including his son sitting right next to him. Another example how Vietnam veterans are so traumatically affected by the Vietnam War. There’s always a constant reminder and comparing between the two wars and how soldiers from the Gulf War glorified by films like the cinema scene when watching “Full Metal Jacket” and playing Vietnam music from their helicopters but in the end it never was the same for Swofford. The only wounds he gained were the feeling of doing nothing but rewarded as a hero. Comparing the Vietnam veteran to Swofford though his war so controversial and he must of killed people when Swofford did nothing and killed no one and he is rewarded and for sees himself a phony hero.
Posted by Unknown at 02:50