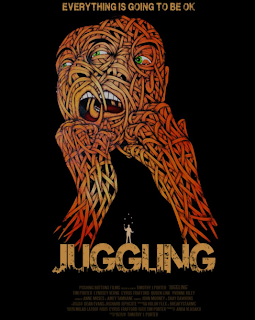 Juggling is a perfect insight into the deep and emotional level of anxiety, panic disorder and coping with the day to day lives that we take granted of. This semi-autobiographical film written and directed by Tim Porter takes us on a dark psychological journey of one’s self trying to cope in a normal life but suffering with a darkly condition, taking the viewers to a voyage into the human mind.

A 23 year old businessman Andrew Watson who suffers from anxiety and panic disorder lived a life of fear and inner chaos of coping with the condition. His disabled mother and life of work prevents him from living his own life but a night out with a friend Andrew finds himself love struck between   a woman he met in a club and his mother. After trying to make the move he finds himself in an inner psychological battle. Anxiety winning Andrew runs away from his desire back home to his mother. His fellow co-worker however wishing the best for him offers him a proposition of total independence with the girl and a new life that awaits him.  Accepting the offer Andrew now must cope with the stress of trying to be “normal”. However this juggling of lives soon takes Andrew’s anxiety to a much darker side of his mind frame.

This short independent film really does reflect the lives between living among the “norm” and coping with anxiety. Tim Porter really does show the juggling between what the audience take granted for their day to day lives of; chatting up girls or boys in the bars, dealing with family stress and our inner demons. Porter really takes Juggling to somewhat of an awareness film of people, who suffer from anxiety, panic disorder. The close up and extreme close ups of the protagonist really makes the audience feel somewhat uneasy being so close to Andrew. That’s what Porter intended to do. The constant feeling of everyone around is too uncomfortably close. The emotionally gripping and charged music really does create a feeling of disarray and chaos. All these minor features that Porter uses create such an atmosphere. The continuous feeling of chaos in the mind frame is most seen when Andrew is out in the world but with his mother a feeling of peace fills the room. But Andrews’s mother being disabled there’s always a sensation of helplessness. Juggling was very much a gripping short film and this being a semi-autobiographical by Tim Porter. There’s very much an emotional human level connection between Porter, the film and the audience. Juggling makes you think how we take granted of our level of coping when there’s people out there that suffer from anxiety and panic disorder. It makes you wonder. And that’s what makes this such a fantastic awareness film.
Posted by Unknown at 16:38